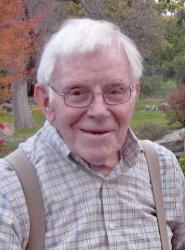 Fred was born on Feb. 4, 1931 to William and Grace (Sims) Engel on the family farm north west of Grant. Fred attended the rural school until eighth grade when his family moved into Grant and he graduated from the Perkins County High School in 1949, where he was a member of FFA.

Fred worked various jobs until he was called to duty for the US Marine Corps, Fred served during the Korean Conflict and was stationed in Korea. During his time in the service he was baptized in California. After serving in the Military Fred began working on the pipeline with his brother-in-law.

Fred moved back to Grant to help on the farm and there he met his future bride Patricia Hansmeier. The couple was united in marriage on Nov. 24, 1957. Fred worked as a body man and tire specialist until he retired.

Fred was confirmed in 1958 and was a member of the Zion Lutheran Church where he served as chairman of the board and Sunday school superintendent for several years and later transferred to Trinity Lutheran Church of rural Ogallala, where he was a faithful active member.

He served his county as a elect member of the Weed Board and also as an area vice president for the Lutheran Brotherhood/ Thrivant.

He enjoyed working on cars and admiring them. He was an avid sports fan and especially enjoyed watching the Huskers. He also loved playing pool with his grandchildren.

For Fred God came first and his family second; they were the joy of his life and he was very passionate about them. His strong faith in God is an inspiration to us. During his illness he was unable to attend church, but he never missed a Sunday listening to the Lutheran Hour.

Fred was preceded in death by his parents, his son Timothy Alan, his four brothers: William, Max, Harold, and Gerald Engel; and his three sisters: Ruth Joosten, Edith Rasco and Maxine Hall.

The family has chosen cremation. A memorial service will be Thursday July 26, 2018 in the Trinity Lutheran Church at 10:30 a.m. with Rev. Jon Dickmander officiating. Burial will be in the Grant Fairview Cemetery at 1:30 p.m with Military Honors. A memorial has been established to the Lutheran Family and Social Services. Condolence may be sent by signing the guest book at drauckerfuneralhome.com where the services will be live streamed for those unable to attend.

Draucker Funeral Home of Ogallala is entrusted with arrangements.