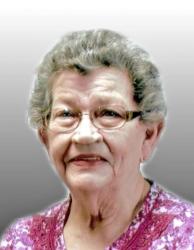 Jane was born on Jan. 23, 1938 on her grandpa’s farm (“Pazzie” Stevens) near Grant, Neb., to Mary Leonora (Stevens) and Chester Buchanan. She grew up on the family farm at Madrid. She graduated from Madrid High School in 1956. She worked at TRW in Ogallala, Neb., after high school until around 1965.

Jane married Larry H. Harger of Arkansas City, Kansas on July 30, 1960 at the Madrid Methodist Church. They made their home and raised their five children in Madrid.

Jane worked at the post office in Madrid as a clerk starting in 1970 for 10 years and then became postmaster for 18 years and retired in 1998.

She helped care for her parents until their deaths. Jane was a member of the Madrid Methodist Church.

Jane was a friend to everyone she met and was loved by many.

Memorials are suggested to the Madrid Cemetery in Jane’s memory. Condolences may be shared at bullocklongfuneralhome.com.

Memorial services will be on Friday, Aug. 10, 2018 at 10:30 a.m. at the Madrid United Methodist Church with Pastor Tammy Aubushon officiating. Interment of cremains will be in the Madrid Cemetery.