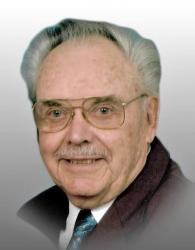 He grew up at Hayes Center and graduated from Hayes Center High School with the class of 1945. After graduation he was drafted into the Air Force and served 11 years.

He then continued his education and graduated from the University of Denver in 1956.

He was offered a teaching position at the college, but turned it down to move to a smaller town for his family.

They moved to Ogallala in 1956 and have lived there since that time.

Dwayne taught school, the majority of his time spent teaching Social Studies in Ogallala. He had many fond memories of the students he taught and many have come and thanked him for his encouragement.

When he resigned his teaching position, he accepted a position as Distributor for a Seed Corn Company in Kansas, Nebraska and Colorado.

He was known to be a jack of all trades, painted and repaired houses, crop adjustor, bought field corn for feedlots, sold insurance, those were his summer jobs.

He was also involved in school athletics, coaching where needed. He was a member of the United Church of Christ Congregational for over 50 years.

The Seed Corn Co. appointed Dwayne and Dorothy as hosts for the company trips that were offered to customers. These trips were all around the world and they were able to see a lot of the geography they taught about in school.

For their 50th wedding anniversary, they traveled through the Panama Canal.

Dwayne was most proud of all his children and grand children for earning advanced degrees in their fields. He was working toward instilling that goal into his great grandchildren.

After retirement they traveled to their winter home in McAllen, Texas.

It also happened to be where a group of Nebraskans were calling it their winter retreat.

Friendships were made and they have enjoyed the area for the last 30 years.

Among his hobbies were dancing, crafts, hunting, fishing and Husker football. His favorite saying he wore on his hat-- “The last of the Good Ole Boys.”

He was preceded in death by his parents; his brother, Reverend Hardy Reese and his wife Jean; a sister, Bonnie Musick and her husband Charles Musick; and brother-in-law, Wilbur Frick.

A memorial has been established in his memory for later designation. Condolences can be shared online at prairiehillsfuneralhome.com.

Funeral services were held Aug. 14, at the First Congregational United Church of Christ in Ogallala, with Pastor Lisa Hadler officiating. Burial with military honors followed in the Hayes Center Cemetery.

Prairie Hills Funeral Home of Ogallala was in charge of arrangements.