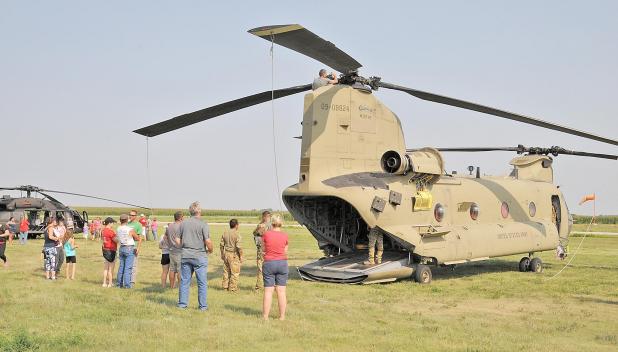 People at the Imperial airport inspect the Army National Guard Chinook and Blackhawk helicopters on Saturday, Aug. 11. Military personnel gave them a send-off when departing for Buckley Air Force Base.

One of three Army National Guard CH-47 Chinooks made an emergency landing a mile east of Tyler Hughes’ home in northwest Chase County Friday, Aug. 3, after warning lights indicated an issue with the craft’s forward transmission.

The three helicopters were flying from Buckley Air Force Base in Aurora, Colorado to summer training in Michigan when the incident occurred.

According to 1st Lt. Chris Poppleton, a warning light indicated metal chips in the oil of the front rotor transmission. When the warning did not clear, the pilots set the helicopter down immediately.

After regrouping, the personnel on the damaged Chinook hopped on the other two Chinooks and continued on to Michigan.

Poppleton said four soldiers remained behind to guard the craft. He said they are required to keep two people with the craft at all times.

He was at Buckley when the emergency occurred. On Aug. 4, he was part of an eight-man team who flew out to replace the transmission.

They thought it could be done in four days but it took the whole week. One of the maintenance team said the front transmission is the more difficult of the two to replace.

A special crane is attached to the Chinook to help lift and remove the transmission. The rotors must come off before and are then put back on after the transmission is in place.

They completed the work on site and then flew the Chinook to the Imperial airport Friday night.

After some test flights and further inspections, the craft was ready to head back to Buckley Saturday afternoon.

A second copter, a UH-60 Blackhawk, and crew was also on site Saturday to help transport the maintenance crew back to Buckley.

Poppleton said they were overwhelmed by all the support from the community, from the hotel to people bringing out food and water to people visiting with them during their stay here.

“What we found is probably one of the best communities I can imagine coming out here to,” he said.

He said it’s been an incredible experience—both in team building for his personnel and bonding with the local community.

“We have wanted for nothing and just had nothing but support day in and day out,” he added.

On Saturday, a number of people turned out at the airport and had the opportunity to inspect the two helicopters and ask questions.

The Blackhawk was the first craft to depart and circled the airport and did a high speed fly-by for the crowd.

The Chinook made a pass across the airport as well before heading east to McCook.

Crew members had returned their rental car to McCook so they were going there to pick them up before leaving for Buckley.