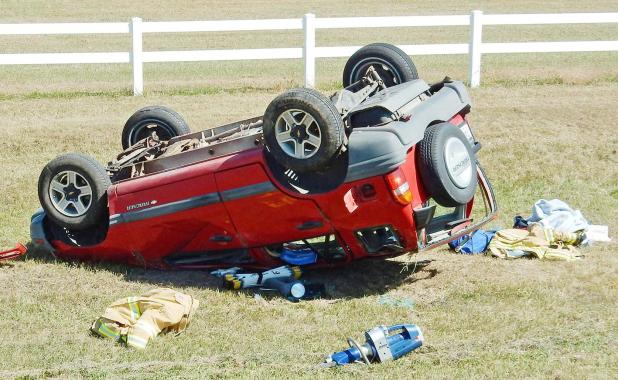 Jacob Sinner and Donna Sinner were injured in a one-vehicle rollover accident one mile north of Grant on Sunday, Sept. 9.

On Sunday, Sept. 9 at 2 p.m., Perkins County emergency personnel responded to an injury accident one mile north of Grant.

Jacob Sinner, 55, of Grant, was driving a red 2002 Chevrolet Tracker southbound on Highway 61 when he allegedly became distracted / inattentive for a moment. He overcorrected after driving onto the west shoulder, causing him to drive off the east shoulder. The vehicle rolled into the east ditch, coming to rest on its top.

Sinner and his mother, Donna Sinner, 77, of Bridgeport, were trapped in the vehicle, requiring use of extrication equipment.

The vehicle was a total loss and towed by Sinner’s Body Shop of Wauneta.

Seat belts were not in use and the accident remains under investigation by PCSO.