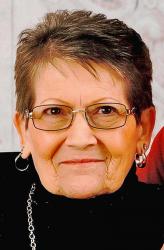 Betty was born in Stockville, Neb. to Vernon and Ella May (Wills) Worley in 1945. She attended rural school in Stockville and high school at the Agricultural School in Curtis, Neb.

In 1962, Betty and Tom Lawson were united in marriage in Maywood, Neb. and had two sons, Roger and Kent.

During their stop in Venango, Neb. from 1967-1970, Tom taught and coached while Betty was a homemaker and worked part-time for the Dodson Grocery Store.

The family then moved to Grant, Neb. where she worked for the Grant Tribune Sentinel as a news/sports writer until 1981.

Betty and family moved to Bellevue in 1981, where she worked as a graphic artist/supervisor for J. P. Cooke Stamps for 26 years before retiring in 2007. They continued to live in the Omaha metro area until 2019.

Tom and Betty made their final move together in 2019 when they relocated in Norfolk.

Betty was “Mom” to all the student/athletes that crossed her path over the years, a loving grandmother, great-grandmother and the love of Tom’s life for the 57 years they shared.

She enjoyed shopping, the Ozarks, being with friends, and most of all, she adored her family. She especially enjoyed family trips and attending all of the families sporting events and activities over the years.

She was preceded in death by her parents Vernon and Ella May Worley.

Memorials are requested to the Nebraska Humane Society or the Arthritis Foundation.

Condolences may be expressed to the family on-line at www.stonacekfuneralchapel.com

Stonacek Funeral Chapel of Norfolk in charge of the arrangements.