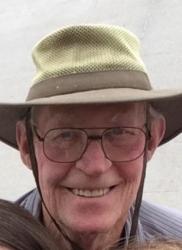 David was born June 17, 1943, at Dubuque, Iowa to Florian and Meda (Hylland) Kedrowski. He attended Omaha schools. Following high school, Dave entered the U.S. Navy, where he served in Vietnam and achieved the rank of Machinist’s Mate E5.

On June 25, 1966, Dave married Saundra Lahman at Lakewood, California. Following his discharge in 1967, Dave and Sandie continued to make their home in California, where he worked for McDonald Douglas Aviation.

In 1972, the couple moved to Alliance, Nebraska where Dave worked for the city water department.

A couple of years later, they moved to Grant, where he and his mother purchased a steakhouse.

They successfully owned and operated the steakhouse until a fire burned the building down in the late 1970s.

Dave eventually went to work for the city of Grant waste management department as a garbageman for 10 years, then switched positions to assistant city manager.

He retired after 25 years with the city of Grant, then went to work at Madrid, where he retired again after three more years.

Dave was gregarious and loved to interact with people. Dave was impressively frugal but yet had a giving heart.

When someone was in need, Dave gave like his left hand didn’t know what the right was doing.

He had an ornery way about him, and his humor at times was less than varnished. Dave’s approachable nature made him the perfect instrument to reach people that might otherwise slip through the cracks.

In so many ways, Dave connected with those who fell on hard times or felt marginalized and made them feel like they were part of his family. In the end, Dave’s life was a beautiful one because of what God did through him despite his imperfections.

Dave was preceded in death by his parents; four sisters; and one brother.

A memorial has been established in David’s name for later designation. Condolences may be shared at bullocklongfuneralhome.com.

Memorial services were held Saturday, Oct. 26, 2019, at the First Congregational Church in Grant with Pastor Denise Johnson officiating. Interment of cremains was at the Fairview Cemetery with Military Honors.