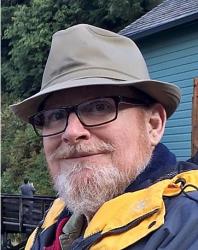 David was born in Grant, Nebraska and grew up on the family farm in Elsie, Neb., with his parents, Bill and Lee Ford, and brother Doug.

Their farm produced wheat and other grains. They kept a large vegetable garden and had a variety of farm animals including chickens, ducks, goats and horses.

Besides dogs, David’s childhood pets included both a skunk and a crow.

David graduated in 1970 from Wheatland High School in Madrid, Neb., where he was an accomplished musician (piano, trumpet, vocal) and athlete (football, basketball, track).

He attended North Platte Junior College before receiving a Bachelor of Arts in technical theater from Kearney State University.

David often worked as a lighting technician for entertainers visiting the campus and had particularly fond memories of shows by Johnny Cash and Lily Tomlin.

Exploring the prairie landscape of his youth, along with Thanksgiving camping trips to Chaco Canyon, New Mexico, with extended family, fueled his interest in archaeology.

He received an Master of Arts in anthropology from the University of Denver in 1981 and went on to a career as a contract archaeologist. He was a member of the Society for American Archaeologists and was a registered professional archaeologist. Much of his work was on public lands that were being disturbed for oil and gas exploration and production; traversed by roads, pipelines and utility lines; or disturbed by timber harvest activities.

Although David focused much of his professional work on sites in the western Great Plains, Rocky Mountains, Columbia Plateau and desert Southwest, he did take a brief detour to Vicksburg, Mississippi, where he worked for the US Army Corps of Engineers researching archaeological site preservation techniques. There he met his wife-to-be, Anne MacDonald. They were married in 1987.

After Mississippi, the couple lived in the Seattle area and Boulder County, Colorado before settling in Lake Oswego in 2000.

In Oregon, he continued his archaeological work for a short time before retiring to focus on his health and his family, particularly his beloved daughter Willa.

He volunteered in the elementary school art literacy program, and taught Girl Scouts how to throw a lariat and flake arrowheads. He excelled at road trips through the Southwestern US, where he could indulge his interest in Native American arts and crafts.

No service will be held. Memorial contributions may be made to the Navajo Relief Fund (www.nativepartnership.org), High Country News Research Fund (www.hcn.org), or a favorite charity.