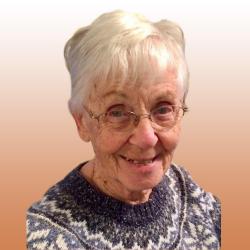 Donna was born Dec. 22, 1931 to Hugo and Valera Beckler of Grant. She graduated from Perkins County High School in 1949 and went on to earn an Associates Degree from Colorado Women’s College in Denver.

She married her high school sweetheart, Jack Holaway, on Sept. 21, 1951 while he was home on leave from the Coast Guard.

They made their first home in Groton, Connecticut and Donna taught preschool there. Later, they transferred to Seattle, and Donna worked at the Fort Lawton Army Base.

Eventually, the pair returned to Grant and went into the sheep business and eventually began farming as well.

Over the years, Donna worked at Midwest Electric and the Perkins County Hospital, besides helping with the family sheep and farming operations.

Three daughters were born to the couple: Michelle, Denise, and Suzanne (Sam). Donna and Jack delighted in their girls and loved them well.

They continually welcomed extra kids into their home, which was nicknamed the Holaway Zoo. Susan (Litz) Martin was one of those “extra” kids who spent many summers with the Holaways and was always referred to as their blonde daughter.

Comanche Airplanes became an integral part of the Holaway story. Jack learned and loved to fly, and early in their marriage, he bought an airplane. Donna was terrified of flying! To conquer her fear, she took lessons, earned her private pilot’s license in 1968, and became an excellent pilot in her own right.

Comanche “fly-ins” all across the country and even the world became their pastime, and later their jobs. Jack became Director of the International Comanche Society in 1987 and Donna was the Executive Secretary.

Together, they published and mailed a monthly magazine to 4,000 members across the globe. They accomplished this as a team for years until Jack died in 1989. Donna continued working for the society until 1994.

Donna loved Jesus, and she lived out her faith in many ways. She was a member of the First Congregational Church for nearly 60 years and served faithfully there in various capacities.

She often blessed others with her musical talents, and perhaps enjoyed that kind of service most of all.

In her later years, she was part of the band known as “The Donna Lou, Lou’s,” which toured nursing homes in the area, playing inspirational music and tunes from various decades. They also played for many senior dances. Donna loved making music with “the boys” as she called them.

So many things could be said about this beautiful lady. She was kind, funny, loving, stubborn, and hard-working. She had the gifts of hospitality and service. She loved Jesus first, and others well. She adored her husband, always supported her children, and thought her grandkids were “just perfect.”

She could make a mean pot of chili, incredible potato salad, piles of waffles, and could never eat a sandwich without a dill pickle. She delighted in feeding “the crew,” and as far as dessert goes, ice cream was her love language.

She was a wonderful wife, mother, grandmother, and friend, and though we will miss her terribly, we celebrate her change of address. She is healed, whole, and seeing Jesus face to face!

Donna was preceded in death by her parents; her husband, Jack Holaway; her daughter, Michelle Wendell; granddaughter, Angela Joy (Wendell) Deaver; and by her brother, Bill Beckler.

A memorial has been established in Donna’s memory for later designation. Condolences may be shared at bullocklongfuneralhome.com.

A celebration of Donna’s life will be held Monday, November 18, 2019, at 3 p.m. at the Congregational Church in Grant with Pastors Sandy Denton and Bev Hayes officiating.  No interment of cremains is planned at this time.