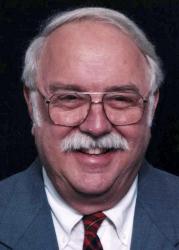 Dr. M. Douglas Parks, Jr. 86, of Ogallala, Nebraska passed away on Monday, Jan. 22, 2018 at the University of Nebraska Medical Center in Omaha.

He attended public schools in Chickasha and graduated in 1948. He was member of the Boy Scouts and the Sons of the American Legion and went to Boys State in 1947. He attended the University of Oklahoma for one year and Oklahoma A&M College for one and a half years.

Doug served in the Army for three years doing active duty for 18 months in Korea during the active war. He served in the 999th Armored Field Artillery as Chief of the Fire Direction Center and in the 8076 Mobile Army Surgical Hospital (MASH) as a diagnostic laboratory technician.

After his Korean service he went to Colorado State University where he earned a Bachelor of Science and a Doctor of Veterinary Medicine. He was a member of BETA BETA BETA, an honorary science fraternity.

In 1960 Doug was united in marriage to Shirley Ann Singleton in Fort Collins, Colorado.

He worked for the Department of Interior, Fish & Wildlife Service in Alaska for five summers as an enforcement agent in the commercial fisheries and as a research biologist. Doug moved to Ogallala in 1961 and practiced large animal medicine for 25 years.

He served on the committee to finance and get the Thunderboat races to Lake McConaughy and was the finance chairman of the two years that the Nebraska High School Rodeo finals were held in Ogallala.

In 1983 he was hired to impersonate Buffalo Bill Cody in the Centennial of Cody’s Wild West Show performing in four shows a day for 14 weeks in Jackson, New Jersey at the Great Adventure Amusement Park, a Six Flags Park.

In 1986 Doug went to work for the United States Department of Agriculture, Food Safety Inspection Service and retired in 2003. During this tenure he was a USDA representative in over 30 countries that were seeking to export meat products to the United States. He was cited by the USDA for Outstanding Service several times. He also belonged to the National Association of Federal Veterinarians and the Food Hygiene Veterinarians Association

Doug and Shirley have traveled extensively and he has visited 54 countries in his lifetime, many of them several times. When working for USDA they lived in Sioux Falls, South Dakota, Lawrence, Kansas, and Omaha. They returned to Ogallala in 2003.

He was active in the community affairs since his return, serving on the Keith County Visitors Committee, Ogallala Planning Commission, Boot Hill Committee, and RSVP serving as a docent in the Petrified Wood Gallery for many years. He was a member of the American Legion, Veterans of Foreign Wars and Korea War Veterans Association.

Doug was active in things Scottish and was head (Commissioner) of Clan MacDonald in Nebraska for many years. He was a long time member of the Lewis & Clark Trail Heritage Foundation. He participated in numerous hobbies and belonged to several hobby groups and wrote three books on hobby subjects.

The funeral service was held Jan. 30 in the Ogallala First United Methodist Church with the Rev. Chuck Rager officiating. Online Condolences may be sent to drauckerfuneralhome.com.

Interment was held in the Fort McPherson National Cemetery near Maxwell with military honors by the Keith County Veterans Organization.

Memorials have been established to the First United Methodist Church and to the Mansion on the Hill.

Draucker Funeral Home of Ogallala was entrusted with the arrangements.