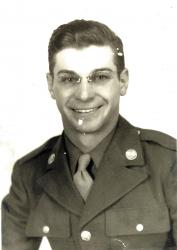 Douglas L. Patterson, age 98, of Grant, Nerbaska, went home to be with the lord, Friday, July 24, 2020 at the Golden Ours Convalescent Home in Grant.

Doug was born September 10, 1921, at Ansley, Nebraska, the son of Roy F. and Fannie (Tomsiceh) Patterson. Doug received his education and grew into manhood in Ansley and graduated from Ansley High School in 1939. Doug was class president, both his junior and senior years.

On November 7, 1942 he was united in marriage to Evelyn Price at Grand Island, Neb. The couple lived in Ansley and Lexington before moving to Ogallala in 1956.

Mr. Patterson entered the armed services on September 29, 1943. He served in New Guinea and Okinawa and was awarded the Asiatic Pacific Service Medal, The World War II Victory Medal and the Good Conduct Medal.

Doug and his brother LeRoy shared a World Herald Newspaper route in their early teen years. After graduation he helped his dad in the well/windmill and plumbing business and was a part time motion picture projectionist. In 1941 he went to California and worked at Consolidated Aircraft Plant on B24 bombers. He left California in the fall of 1942. After his marriage in November of 1942, he and Evelyn moved to Omaha where Doug worked at the Glen L. Martin Aircraft Plant on B26 bombers. Doug was honorably discharged from the Army, January 11, 1946. He went back to work with his dad, then a year with the Ansley Village Light and Power Plant, a short time with Boenig Aircraft in Wichita, Kan., a short Service Supply in Lexington as a plumber for two years. Doug then farmed for two years in Custer County prior to moving to Ogallala in 1956. He was employed as a major appliance installer and repairman for ten years,  was employed by the Water and Sewer Department for ten years. He then was employed by Province Plumbing of Broken Bow, Neb. for two years and returned to Ogallala and was employed by Jirik Plumbing of Brule for four years. Doug then operated his own plumbing business for seventeen years until his retirement in 1999.

Doug was a longtime member of the Berean Church where he served on the Deacon board and as a Sunday School teacher. He spent many years as the maintenance man at the church located at West “E” and East “O” Streets in Ogallala.

As a young man, Doug enjoyed fishing and was always wanting to find out how things worked and how to make them work. He liked to repair most anything. Mr. Patterson loved his family and spent many hours with them, he even had a softball team. He and his family had many good times and a few bad times but always got along alright.

He was preceded in death by his wife of 70 years; his parents; two brothers, LeRoy and Richard; four sisters, Betty Jane, Hazel, Fanniebell and Veryl; and a grandson, Kevin Jacobsen.

Visitation will be Wednesday, July 29 from 9 a.m. to 6 p.m. at the Draucker Funeral Home Chapel. Funeral Service will be Thursday, July 30 at 9:30 a.m. M.T. from Grace Point church with the Rev. Curtis Tschetter Officiating.

Burial will be at 1 p.m. C.T. in the  Fort McPherson National Cemetery, at Maxwell Nebraska. Military Honors by the Keith County Honor Guard.

A memorial has been established to Golden Ours Convalescent Home in Grant. Funeral Services will be live streamed.

Draucker Funeral Home has been entrusted with arrangements.