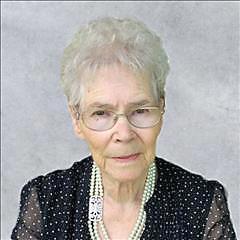 Esteline Lucille Waterman, 91 of Grant, passed away Sunday, August 2, 2020, at the Golden Ours Convalescent Home in Grant.

Esteline grew up in Perkins County. On January 22, 1950, she married Kenneth Waterman in Grant. They were blessed with six children, Donna, Eugene, Darlene, Jim, Donald, and Dianna.

Esteline was survived by her children, Donna Carey of Brule,

Esteline was preceded in death by her husband, Kenneth, in 2009; her parents; two brothers, Galen and Alva Lovenburg; two sisters, Dorothy Pegg and Dolores Updike; two sisters-in-law, Marian Dale Lovenburg and Dink Lovenburg; one infant great-grandson; one great-granddaughter and several nieces and nephews.

A memorial has been established in Esteline’s memory for later designation. Condolences may be shared at bullocklongfuneralhome.com.

Memorial services for Elteline will be Monday, August 10, 2020, at 10:30 a.m. at the Grant United Methodist Church with Pastor Lorri Kentner officiating. Interment of cremains will be in the Grant Fairview Cemetery.