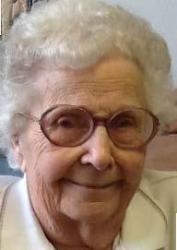 Eunice Prottsman, 88, lifetime Venango, Nebraska area resident, passed away Nov. 27, 2016 at Golden Ours Convalescent Home in Grant, Nebraska with family by her side.

Eunice was born May 1, 1928 on the Behrens farm in Sedgwick County, Colorado northwest of Venango. She was the second of two children born to Albert and Martha Behrens.

Eunice married Wayne Prottsman, her high school sweetheart, on May 8, 1947 in Holyoke, Colo. Four children were born to this union.

Eunice lived her whole life in the Venango area, moving to their farm south of town in 1953. She was very active in the church and was a Sunday school teacher for quite a number of years.

Eunice was a farm wife, with all that that entails. She was an avid reader and enjoyed writing, rhyming “ditties,” or making up riddles for any family gathering.

Shortly after a fire destroyed their home in 2010 Eunice and Wayne moved to Westview Retirement Community in Grant, with Eunice moving into Golden Ours in 2011.

Eunice was preceded into eternal life by her husband of 64 years; her parents; son Rory; grandson Wesley Prottsman; sister Leota Burns; all of her brothers-in-law and one sister-in-law.

Eunice is survived by her children: Ron (Mary Fran) of Panama City Beach, Florida, Linda (Dan) Winchell of North Platte, Neb., Marlon (Barb) of Imperial, Neb.; three grandchildren: Tonya (Chris) Warneke of York, Neb., Jeremy Reimer of Jefferson, South Dakota, Whitney (Laura) Prottsman of New Orleans, Louisiana; two great-grandchildren who were the light of her life, Ally and Sammy Warneke of York; along with many other relatives and friends.

Memorials are suggested to the Golden Ours Activity Department in Eunice’s memory. Condolences may be shared at bullocklongfuneralhome.com.

Graveside services were held on Wednesday, Nov. 30, 2016 at the Venango Cemetery with Pastor Chris Costrini officiating.