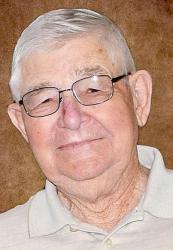 George Vapenik, 91, of Pleasanton passed away Monday, May 11, 2020 at Kearney Regional Medical Center. Private family services will be Friday, May 15, 2020 at Pleasanton United Methodist Church with the Rev. Seung Ho Park officiating. Burial will follow at the Pleasanton Cemetery. The community is invited to drive through the cemetery at the conclusion of the graveside service around 11:30 a.m. to express their sympathy and show their support to the family.

The family encourages messages of condolence to be made through the funeral home website at www.osrfh.com or send cards/memorials to the family in care of O’Brien Straatmann Redinger Funeral Home, 4115 Ave N, Kearney, Neb. 68847.

George Ernest “Dutch” Vapenik was born December 8, 1928 to Jim and Katherine (Lindauer) Vapenik in Hayes County, Neb. He was the youngest of four boys. When George was just 18 months old, his mother passed away. George’s father raised him and his brothers in Hayes County. George attended country school through eighth grade and started farming in 1945 and farmed his entire life.

George was united in marriage to Velda Pegg on September 25, 1949 in Grand Junction, Colo. To this union two daughters were born, Janet and Beverly. Family was very important to George and he especially loved his grandchildren and great grandchildren. George had the patience of a saint and didn’t know a stranger. He took great pride in his farming and enjoyed fishing when he wasn’t working. George was an avid sports fan and was always cheering for the Husker volleyball team. George also had a passion for the game of baseball. From his early adult years, he enjoyed playing baseball. He played on several town/neighborhood ball teams every Sunday. One of the teams was called the Green Valley Stump Jumpers. In later years he was either playing ball with his kids and grandkids or watching baseball on TV, especially his St. Louis Cardinals.

After his retirement from farming George and Velda purchased a 5th wheel camper and would spend their winters in New Mexico and warmer weather. They loved their years of travel and meeting new people. Their winter days were spent visiting, playing cards, or having a casual golf game. They did this until his health required him to stay closer to his doctors.

Memorials are suggested to the Pleasanton Volunteer Fire and Rescue Department. Services are entrusted to O’Brien Straatmann Redinger Funeral and Cremation Services of Kearney.