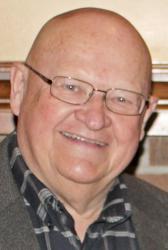 Glenn Taubenheim, 66, of Grant, Nebraska, passed away Tuesday, Dec. 12, 2017, at his home.
Glenn was born May 19, 1951, in Kearney, Neb. to Lee and Rosemary (Jeffers) Taubenheim. He graduated from Amherst High School with the class of 1969.
On Sept. 25, 1971, Glenn married Bonnie Hadwiger at Amherst, Neb. The couple made their home in Amherst briefly, before moving to Broken Bow, Neb., where Glenn worked for Sargent Irrigation. Their union was blessed with two children, Clint and Shannon.
As Glenn worked his way up through the ranks at Sargent, the couple made a stop in Gothenburg, Neb., before eventually relocating to Grant in the Fall of 1974 where he served as branch manager. Glenn’s leadership drove the branch to tremendous growth and success.
Glenn enjoyed cars, especially Corvettes. Regardless of what Glenn was driving, he was often most recognizable as the fastest one on the road. One could say that Glenn drove his cars with the same zealousness that he lived his life.
Glenn was a tremendous grandpa and loved to tease and play with his grandkids. He considered himself very blessed and didn’t take his blessings for granted.
Glenn was a silent yet ardent supporter of the community of Grant, the school and Grant athletics. He was a staple on the chain gang during football games and at the finish line for track and field events. When the school needed something, like weight room equipment, they knew who to call. Glenn gave of his time and financial support almost unceasingly, forsaking recognition, and in so doing, embodying the type of leadership that makes the community of Grant such a special place.
Glenn was preceded in death by his parents, and a brother, Greg.
Survivors include his wife, Bonnie of Grant; son, Clint (Nancy) Taubenheim of Lincoln, Neb.; daughter, Shannon (Justin) Vaughn of Parker, Colo.; 7 grandchildren, Regan, Tyler, Lauren, Luke, Zach, Owen and Max; 2 brothers, Tim (Janice) Taubenheim of Amherst and Kent Taubenheim of Elwood, Neb. (Johnson Lake area); along with many other relatives and friends.
A memorial has been established in his memory. Condolences can be shared online at bullocklongfuneralhome.com.
Services were held Friday, Dec. 15, 2017, at the Grant United Methodist Church with Pastor Elmer Armijo officiating.
Bullock-Long Funeral Home was in charge of arrangements.