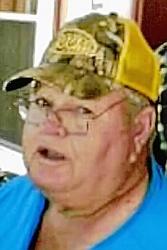 Harold Wayne Harmon was born August 7, 1937, at Imperial, Nebraska, to George and Marietta (Munson) Harmon. Harold grew up and attended school in the Champion-Lamar, Nebraska area. As a young man he assisted on the family farm and became a farmer himself, farming near Champion, Nebraska, for many years.

Harold was married to Frances Weiss, and Jan Liebhart. He married Judy Troudt on May 26, 2006. He was an artisan in his own rite, playing in three different Western Bands. He enjoyed hunting and camping in the mountains and loved fishing on his boat “The Blue Angel”. Harold was a charter member of the Imperial Eagles Aerie # 3472, as well as an Elks member of Wray, Colo.

Harold Harmon passed away early Thursday morning, November 28, 2019 at the Wauneta Care and Therapy Center in Wauneta, Neb. He was 82 years of age.

There will be no viewing; Harold chose cremation.

In lieu of flowers a memorial has been established to the Champion Community Center.

(The Chase County Museum of Champion will be open after services to view some of Harold’s displays.)

Online condolences may be left at liewerfuneralhome.com