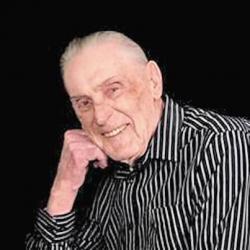 Harvey was born June 29, 1927, at Madrid, Nebraska, to Ed and Isabelle (Kelso) Lovenburg. He attended school in Madrid.

In 1945, Harvey married Rosalie Bates. The couple farmed in Perkins County their entire married lives, primarily south of Madrid. Rosalie passed away in 1990. In 1997, Harvey moved into town. He enjoyed a wonderful companionship with Katy Miyamoto, which spanned over twenty-five years.

Harvey was quite reserved and tended to keep to himself. He was honest and hard-working, enjoying the simple things of life. Harvey always enjoyed spending time around kids and animals. He also liked to take an occasional trip to the casinos until his health would no longer allow such adventurous outings.

Harvey was preceded in death by his wife, Rosalie; his son, David; granddaughter, Sasha Gartner; five brothers and one sister.

A memorial has been established in Harvey’s memory for later designation. Condolences may be shared at bullocklongfuneralhome.com, where a recording of the service will be made available.

Graveside services were held on Saturday, May 30, 2020, at 3 p.m. at the Madrid Cemetery with Pastor Tammy Aubushon officiating.