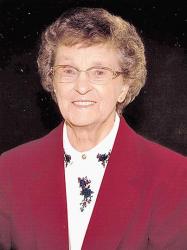 On June 15, 1947, Helen was united in marriage to Harvey Lee Johnson, and their union was blessed with two daughters, Ronda and Janelle. The couple made their home in Ogallala for several years before eventually moving to the farm west of Brule. Helen served as an EMT for over 25 years and had also worked in nursing. In 1985 she began working as a paraeducator with Brule Public Schools, which she did for eight years.

Helen was a deeply faithful woman, and she imparted that faith to her children. She loved baking, cooking, gardening, and more recently, sewing, which led her to make new friends doing alterations. Helen also cherished every moment she spent with her family, particularly her grandchildren and great-grandchildren, who she was very proud of.

Helen was preceded in death by her parents; husband, Harvey; son in law, Garry Lawyer; brothers, Harold and Marvin Harms; and a sister, Corrine Harms,

Survivors include her children, Ronda Lawyer of Grant, Janelle Johnson of Morrill; four grandchildren, Trent (Shannon) Brown of Lincoln, Nathan (Rose) Lawyer of Ashland, Wis., Dustin (Amber) Lee of Pine Bluffs, Wo., and Camilla Lee of Scottsbluff; nine great-grandchildren; along with many other relatives and friends.

In lieu of plants and flowers, memorials are suggested to the St. John’s Evangelical Lutheran Church in Brule or the donor’s choice. Condolences may be shared at bullocklongfuneralhome.com.

Services were held on Wednesday, August 12, 2020, at 11 a.m. at the St. John’s Evangelical Lutheran Church in Brule with Rev. Jon Dickmander officiating. Interment will be in the Brule Cemetery.