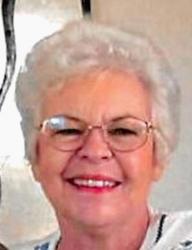 Jean Ann (Beran) Slagle, age 83, passed away at her home in Ogallala, Nebraska on Monday, August 31, 2020, after a two year battle with Mesothelioma, with husband Ted and daughter Kim at her side.

Jean was born on March 6, 1937 in Beatrice, Neb., the daughter of Ben and Velma (VanOsdol) Beran. She grew up in Hebron Neb., with her older brother Richard and younger brother Larry. She vividly remembered the tornado of 1953 that destroyed many businesses and homes in Hebron, along with the high school she was attending as a sophomore.

After graduating from the rebuilt Hebron High School in 1955, Jean attended Nebraska Wesleyan University in Lincoln, becoming a member of Willard Sorority and graduating with a B.A. in sociology in 1960. During a Wesleyan fraternity dance, Jean met the love of her life, Ted Slagle of Grant, Neb. The couple married on June 26, 1960 at St. Paul United Methodist Church in Lincoln. They were blessed to celebrate their 60th anniversary together earlier this year.

After living in Wisconsin, Georgia, and New Mexico, the couple settled in Ogallala in 1970 when Ted accepted a position with TRW. Starting in 1974, Jean worked as a sales secretary at TRW. From 1989 until her retirement in 2005, she was a familiar face at the office of the Ogallala Methodist Church, where she worked as the church secretary.

Active in the church throughout her life, Jean was a 50 year member of the Ogallala Methodist Church and United Methodist Women where she held many different offices.

She was a member of Amica Club, Shifty Dozen Extension Club, and Newcomer’s Club. Through Compassion International, Jean and Ted proudly sponsored Paola Pedroza for 14 years, exchanging letters and photos frequently as the young girl grew up in Bolivia. The highlight of the couple’s travels was a trip to Israel where they waded in the Jordan River, crossed the Sea of Galilee, and visited famous sites like Masada and the Wailing Wall. For relaxation, Jean loved nothing more than a book of crossword puzzles. She was wicked good at solving them.

Jean was preceded in death by her parents, brother Richard and brother-in-law Max Slagle.

Funeral Service was held at 10:00 a.m., Saturday, Sept. 5, 2020 in The First United Methodist Church of Ogallala with Rev. Chuck Rager officiating. Burial will be in the Ogallala Cemetery.

A memorial has been established to the Ogallala Methodist Church or the Mesothelioma Foundation in her name.

Draucker Funeral Home has been entrusted with arrangements.