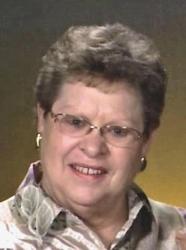 She was the youngest of nine children born to William and Mathilda Fehringer Sept. 5, 1940 in Brunswick, Nebraska. She graduated from Bloomfield High School. Jeanette married John Andreasen on August 4, 1962 in Bloomfield and made their home there for a year before moving to Blair and eventually Grant, Seward and finally Lincoln to keep up with their grandchildren’s activities.

She worked as a nurse’s aide for several years before becoming owner and manager of Woodstock Pizza in Grant where she made an impressive impact on so many. She was known for her joy and generosity, her unforgettable laugh, her candid directness, contagious enthusiasm especially at sporting events, and hugs and kisses. Jeanette never knew a stranger and could make a new friend anywhere she went.

She was a beloved daughter, sister, wife, mother, grandmother, aunt, cousin and friend. She enjoyed cheering on and supporting her grandchildren year round no matter what they were doing. She also loved making, sharing and eating food. Jeanette truly had a servant’s heart and was devoted to her Catholic faith.

She was preceded in death by her parents, brothers Cletus, Robert, Gordon and Stanley and infant granddaughter Tori.

Arrangements were made by Volzke Funeral Home of Seward, Nebraska.