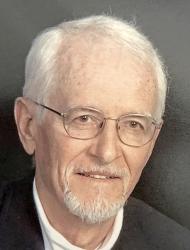 Jerry was born on Nov. 19, 1937 in Grant, Nebraska, the son of Howard and Marguerite Stephens.

He was valedictorian at Perkins County High School in Grant in 1956 and graduated from the University of Nebraska in 1961 with a degree in civil engineering.

After graduation he joined the U.S. Forest Service in San Bernardino, California. He served as city engineer of Columbus, Neb., from 1970 to 1974 before beginning a 34-year career with the Federal Aviation Administration. The majority of his career with the FAA was spent in Annandale, Virginia, where he served from 1974 to 1993 before transferring to Grand Island, Neb., from 1993 to 1995. His last position with the FAA was in Olathe, Kansas in 1995 where he served until his retirement in 1999.

Jerry was a member of the Ogallala Masonic Lodge #159 A.F. & A.M., received an Outstanding Young Engineer award for the Columbus chapter, was a past member of the National Society of Professional Engineers and was also a member of the NARFE Federation.

Jerry enjoyed spending time with his family and he was very involved with his daughters’ sporting events. He was a coach for BRYC girls soccer teams and an assistant coach for boys’ football in northern Virginia.

His other passions included hunting, fishing and Nebraska football. In his 23 years as a season ticket holder for the University of Nebraska Football, he never missed a home game.

He was predeceased by his parents, Howard and Marguerite Stephens and his brother Dean.

He is survived by his loving wife of 58 years, Joanne Hanis and daughters, Jana Fischer (Walter) of Geneva, Florida; Carma O’Sullivan (Joseph) of New Orleans; and Jia Doherty (Daniel) of Leesburg, Va. He was blessed with five grandchildren: Alex, Ashley, Connor, Molly and Ciara. He is also survived by brother-in-law, David Hanis (Jean) of Bruno, Neb.; sister-in-law, Shirley Stephens of San Antonio; and several nieces and nephews.

Special thanks to Dr. Maureen Sheehan, retired Dr. James Ruhlen, Dr. Ayalew Tefferi, and Dr. Ruben Mesa of the Mayo Clinic; and especially Brad Stephens and family for the many years of care and support.

Services will be held Monday June 18, 2018 at 11 a.m. at Grace United Methodist Church in Olathe.

Friends and relatives are invited to a visitation at 10 a.m. before the service begins.

Memorial contributions may be made to: