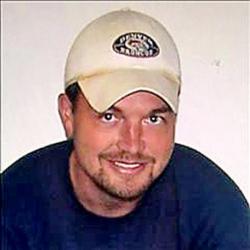 Korey was born Oct. 12, 1976, in St. Francis, Kansas to Ed and Sharon (Wright) Lowe. He attended Grant High School where he was crowned Homecoming King and proved to be a gifted athlete.

He holds the basketball record for three-point shots, and was on state qualifying teams for basketball and football.

Following his graduation, he attended the University of Nebraska - Lincoln for two years for business education.

Korey worked at Wendell Irrigation before working at Winfield Solutions and In & Out Convenience Store in Grant. Most recently, Korey had been working at a farrowing house.

He also watched NASCAR, where he always favored the car that was sponsored by Lowe’s. He kept an extensive collection of ballcaps that captured his love of sporting teams and his keen eye would regularly catch when someone had been touching them or getting them out of place. He also loved spending time at the lake with his family and friends.

Korey was light-hearted and liked to tease his friends. He enjoyed trying to make people laugh and his smile often put a smile on the faces around him.

Korey had a warm and magnetic personality that was endearing.

Korey was preceded in death by his mother, Sharon; grandparents; and aunt, Glennys Geisert.

Survivors include his father, Ed Lowe of Grant; brothers, Karey of Grant, Jason and Justin, both of San Diego, Calif.; uncles, Harold Lowe of Manhattan, Kan., and Pete Lowe of North Platte, Neb.; aunt, Donna Wright of Calif.; he loved his Godsons, Kane and Kohl DeLaour and Dominic Wendell; special friend, Regina Berry; as well as many cousins, nieces and nephews.

A memorial has been established in Korey’s memory for later designation. Condolences can be shared at bullocklongfuneralhome.com.