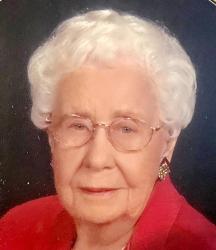 LaDeen was born April 3, 1918, in Elsie, Nebraska. She was the youngest of four children born to Raymond and Leota (Coleman) Allen.

LaDeen attended elementary and high school in Elsie, graduating with the class of 1935. She joined the Methodist Church in Elsie in 1930 and was a faithful member in Elsie and Madrid, Neb., her entire life.

LaDeen graduated from McCook Jr. College and attended the University of Nebraska. She taught school for 25 years in Perkins County and in the McCook school system at their satellite location at Imperial.

At the age of 6, LaDeen was asleep on a cot in the back of the Elsie drugstore, which her parents operated. Her parents got her out of bed to lay Perkins County Sheriff Miles Keller on the cot after he had been wounded during a shootout with Albert Mutsinger in the Elsie main street when Keller attempted to arrest Mutsinger. Both men later died.

LaDeen married Harold L. Shepherd March 3, 1937, in Hayes Center, Neb. They made their first home in Elsie where Harold taught at District 70. In 1939, they moved to Madrid where they lived until they retired in 1972.

After retirement, the couple spent winter months in Brownsville, Texas, Hawaii, San Diego, California, and Arizona, always returning to Madrid for the summer.

After Harold’s death in 1992, LaDeen continued to travel to Mesa and back to Madrid until 1999 when she moved permanently to Mesa to be near her daughter.

LaDeen always took an active part in the civil affairs of the community. She belonged to the Rebekah Lodge where she was secretary. She was Den Mother for Boy Scouts and a Girl Scout Leader.

She held all the offices in the Madrid Women’s Club and also in the Ladies Aid, W.S.C.S. and U.M.W of the Methodist Church. She was treasurer of the Sunday school and along with her husband, Harold, sponsored the Epworth of League, the young people’s group of the church, for 10 years.

LaDeen served at the WWII Canteen in North Platte several times a year. She played the piano at the Canteen when the trains stopped. “Happy Birthday” was always played in honor of any serviceman with a birthday and the boys would go wild when she played “The Wabash Cannon Ball,” a favorite at the time and one of the few tunes she knew by heart.

She was preceded in death by her parents, Raymond and Leota Coleman Allen; brothers, Gerald and wife Jessie, Vernon and wife Alice and Chester and wife Lucille.

A memorial has been established in her memory. Condolences can be shared at bullocklongfuneralhome.com.

Memorial Services will be Monday, Nov. 27 at 2 p.m. at the Madrid United Methodist Church with Pastor Tammy Aubushon officiating.

Interment of cremains will be in the Madrid Cemetery.