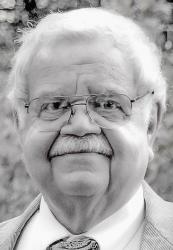 He graduated from Ogallala High School in 1960. Then moved on to Nebraska State College of Chadron, Nebraska, graduating in 1965 with a Bachelor’s Degree in Economics and Business Administration.

While attending college he meets his sweetheart Sherri Yvonne Floyd sweeping his young wife off her feet into marriage on Aug. 16th,1964 in Walsh, Colorado to live in Chadron.

They enjoyed a close relationship raising two energetic boys over a 56-year marriage.

LD found great pride in his work and the relationships he cultivated through business and community leadership. Over his lifetime, he served in the USDA Forest Service, 34 years with John Deere including 22 years where he owned multiple John Deere Dealerships from Gordon, Nebraska, to Blackwell, Oklahoma then back to his beloved hometown of Ogallala, Nebraska.

He also sold real estate, and assisted with the design of multiple equipment attachments for both Orthman Manufacturing and Hesston.

LD also served in multiple committees and organizations over the years. In Ogallala alone, he served in the Methodist Church, City Council, Cemetery Board and Airport Authority.

He was also an avid reader of biographies, and was a proud member of the Ogallala Masonic Lodge. LD loved flying, goose hunting, raising cattle, and did many of these things with his wife and sons by his side.

LD was preceded in death by his parents.

Interment will be in the Ogallala Cemetery.

A memorial has been established to the First United Methodist Church in his memory.

Online condolences may be left at www.drauckerfh.com by clicking the Share a Memory or Tribute Wall button.

Draucker Funeral Home of Ogallala has been entrusted with arrangements.