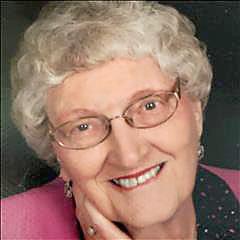 Lois was born March 29, 1925, in Grant, Nebraska to Lawrence and Florence (Mickels) Larsen. She graduated from Perkins County High School. Lois married Everett Jones on February 17, 1945, and their union was blessed with five sons: Kenneth, Vernon, Randy, Leroy, and David. The family lived 8 miles northeast of Grant, where they owned and operated a dairy farm for many years.

In addition to being a hard-working mom and devoted wife, Lois also helped raise the livestock. In addition to dairy cows, they also raised and butchered chickens. Lois and Everett were a hard-working, loving, and steadfast couple.As a mother, Lois was strong and firm, yet very loving.

Lois’s faith was important to her, and she was always involved at the Methodist Church. As an active member of United Methodist Women, she helped serve countless funeral dinners over the years. She was very involved in the Sawyer Club even after the Sawyer country school merged with Grant. In her later years, she enjoyed participating in the Red Hat Society as well as the “Lois” Club. Lois was also known for her fabulous pies, especially her sour cream raisin pie. Lois enjoyed gardening and embroidery work. When her grandchildren were born, they added a new depth and meaning to her life.

Lois was preceded in death by her parents; husband, Everett; siblings Lillian, Keith and Larry; and daughter-in-law Cathy.

Survivors include her five sons and their spouses: Kenneth and Nita Jones of Omaha; Vernon and Pixie Jones of Fort Morgan, Colo.; Randy Jones of Westminster, Colo.; Leroy and Connie Jones of Paxton, Neb.; David and Lori Jones of Harvard, Neb. Lois is also survived by 14 grandchildren, 21 great-grandchildren, four great-great-grandchildren; her brother Ronnie Larsen and spouse, Catherine of San Antonio, Texas; sister-in-law, Betty Larsen of Grant, as well as many other relatives and friends.

A memorial has been established in Lois’s memory for later designation. Condolences may be shared at bullocklongfuneralhome.com, where a recording of the service will be posted for those unable to attend.

Visitation was Saturday, from 10 a.m. until 1 p.m. at the Bullock-Long Funeral Home in Grant.