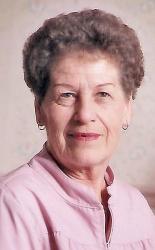 To this union, they had 5 children - Dawn, Robin, Kandy, Daryl and April.

They resided in the Garden Grove, Calif. area until 1964, when they moved their family to Grant, Neb. Don had family there, as he had grown up on his parent’s farm outside Grant until his family moved to Oregon to farm and then later to southern California to start a construction company.

In 1968 Don and Lois settled in Wallace, Neb., where Don worked for Hansen Lumber Company until his death from cancer in 1977. Lois had worked at the Wallace Bar for many years. From 1982 to 1991, Lois was married to Eldon Hilker of Cambridge, Neb. After retiring from farming they moved to Lakewood, Colo. where Lois managed an apartment complex. They later moved to North Platte where Lois managed Buffalo Bill Manor for a number of years.

Lois was diagnosed with Alzheimers in 1995 and resided in assisted living since that time. She continued to bring much joy to her family and those who knew her.

Survivors include her son, Daryl (Tatia) Peck of Spring Hill, Fla. and daughters, Dawn (Marvin) Howery and April Peck-Brown of North Platte and Kandy Peck of Omaha. Also a son-in-law, Steve Gier of Wallace; 19 grandchildren, and 31 great-grandchildren, along with several nieces and nephews.

Lois was preceded in death by her husband, Donald Peck; her daughter, Robin Gier; her grandson, Aaron Gier; her son-in-law, Doug Brown; her parents and siblings, Leonard Harris, Corene Cornelius, Selma Tyson and Alma Dailey. A memorial has been established to the North Platte Alzhiemers Support group and online condolences can be made at www.adamsswanson.com

Private family graveside services will be held at the Morning View Cemetery in Wallace, Neb. at a later date. Adams Swanson Funeral Home is in charge of arrangements.