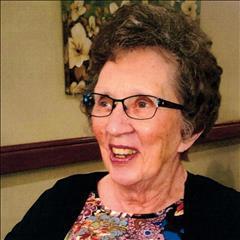 Loneta was born December 14, 1939, in Perkins County, Nebraska, to Carl and Gertrude (Pankonin) Mosel. She graduated from Grant High School with the class of 1957.

On June 20, 1959, Loneta was united in marriage to Merrill “Ollie” Olvey, in Lincoln. Their union was blessed with three children, Toni, Tammy, and Merrill Jr.

Loneta was a woman of great faith, which shaped the kind of wife and mother she was.

It was important to Loneta that she impart the faith to her children, and live the faith as best she could in life.

Loneta was preceded in death by her husband, Merrill “Ollie” Olvey; and son, Merrill Olvey Jr.

Survivors include her daughters, Toni Flohr of Alma, Kan., Tammy (Tom) Lore of Alliance; eight grandchildren; thirteen great-grandchildren; brother, Larry Mosel of Grant; along with many nieces, nephews, other relatives, and friends.

In lieu of flowers, memorials are suggested to the Trinity Lutheran Church in Ogallala; 32695 Road 768, Ogallala, Nebraska, 69153.

Condolences may be shared at bullocklongfuneralhome.com.