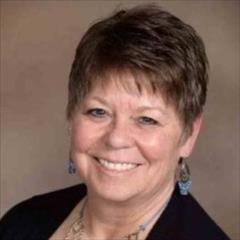 On Sept. 7, 1991, Lori married Mark Beckius. Lori worked at Prophet Systems in Ogallala for many years as a support manager, database administrator, and IP telephone administrator. In 2008, Lori started her own business, Ogallala Technical Associates, where she offered computer hardware and technical support for many in the area. She also began working at St. Luke’s Catholic Church as the director of the Faith Formation and Youth Ministry programs. Lori stepped away from these programs when her health would no longer allow her active involvement.

Lori loved the mountains, parasailing, camping, scrapbooking, and crafting. She enjoyed walking with her beloved corgi, Reggie, and playing with her grandkids, especially a good game of Rummikub. She was proud of her Irish heritage all year round, not just on St. Patrick’s Day.

Lori’s faith in Jesus was an inspiration to many around her, from family and friends to her catechists to students. She impacted many lives, especially in the way that her faith shined through her arduous bouts with cancer.

Lori was preceded in death by her parents; sister, Marion Watts; grandchild, Baby Case; niece, Sarah; many aunts and uncles, as well as her corgi, Reggie.

In lieu of flowers, memorials are suggested to St. Luke’s Catholic School or Alzheimer’s Association in Lori’s Memory. Condolences may be shared with the family at prairiehillsfuneralhome.com.

Due to current health restrictions, a private family burial will be in the Crete-Pleasantview Cemetery at Champion, Neb., with Fr. Bryan Ernest officiating. A public Memorial Mass will be celebrated for Lori at a later date.

Prairie Hills Funeral Home of Ogallala is in charge of arrangements.