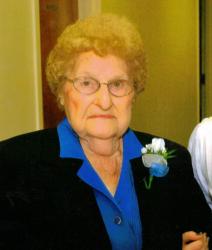 Marie Jane (Vlasin) Smith was born on Oct. 19,1924, at the farm home south of Madrid, Nebraska, to August and Anna (Cizer) Vlasin. She was baptized and confirmed at Resurrection of Our Lord Catholic Church in Elsie.

As a child, she attended country school through the 8th grade then went to work on the family farm milking cows and helping with all other farm chores.  During this time she met Wayne Smith.

Marie married Wayne Jack Smith on Oct. 18,1941, at the St. Mary’s Catholic Church in Wallace, and to this union four children were born:  Vesta, Kenny, Dotty and Stan.

The couple made the Wauneta area their home for these many years, moving to their present location in 1961.

Marie passed away on Thursday, Nov. 14, 2019, at the Wauneta Care and Therapy Center where she had been a resident since May, 2018.

She was a member of St. John’s Catholic Church of Wauneta and an active member of St. John’s Altar Society.  She was also a member of the Eagles. During Marie’s marriage, she worked as a cook in Wauneta cafés. She was the manager and cook for the Imperial Auction Market Café for several years, all the while also doing all the bookwork for Wayne’s custom and Wauneta Truck Line businesses and raising a family.  Even doing all of this she enjoyed her hobbies of gardening, raising chickens, playing cards, baking and her “favorite,”caring for her grandchildren, great-grandchildren and great-great-grandchildren.

Marie was preceded in death by her parents, eight siblings, her husband Wayne, son-in-law Dean Dack and Grandson Spencer Smith.

Liewer Funeral Home of Wauneta in charge of arrangements.