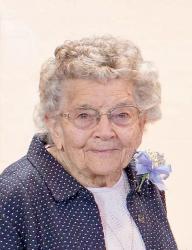 Marion was born Jan. 3, 1928, the oldest of three daughters born to Herbert and Esther (Mosel) Boehmer.

On May 30, 1948, she was united in marriage to Ervin C. Oellermann and to this union four children were born, Elaine, Yvonne, Janet and Charles. The couple made their home on a farm northwest of Grant.

Marion focused her efforts on raising her family and serving the church. She was a lifetime member of Trinity Lutheran Church, where she was organist, Sunday school teacher, member of LWML and quilting group.

She also enjoyed gardening, needlework, and being Erv’s “right-hand man.” She mowed the farm until she was 89.

In addition to her parents and sister, Lois Spicer, Marion was preceded in death by her husband, Ervin, in 2006, and a grandson, Matthew Redfern, in 1979.

A memorial has been established in Marion’s memory for later designation. Condolences may be shared at bullocklongfuneralhome.com.