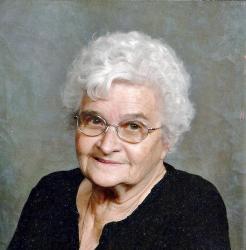 Nettie was born July 21, 1931, to Loren and Cora (Trembly) Fisher at the family home in the Beecher Island area. She was the second of seven children.

She attended first through eighth grade at District South Willow No. 97, a country school that was one and a half miles from their home. They walked or rode a horse to get to school.

She attended high school at Wray High School and graduated in May of 1949. While attending high school, Nettie met LaVerne Sheldon. The couple was married at her parents’ home June 5, 1949. They moved to a house that was built for them on LaVerne’s parents’ farm north of Wray, where they raised their family and lived their entire married life.

To this union four children were born: Dennis, Nancy, Lois and Susie.

Nettie moved to her home in Laird, Colo., in 1999 following LaVerne’s death. She lived in Laird until January of 2016 when she moved to Hillcrest Care Center in Wray, where she lived until her death.