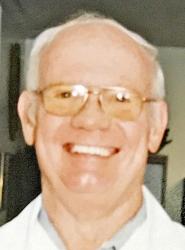 Paul was born on June 14, 1935, in Wichita, Kansas, the second of three sons of Virgil E. Bottom and Thelma (Scott) Bottom. The family moved to Fort Collins, Colorado.

WWII took the family to the east coast. Following the war, the family returned to Fort Collins where Paul graduated and was an outstanding student-athlete. He was proud to have garnered all-state honors twice in both football and basketball. He was also a gifted baseball player, and could have played professionally had he wanted to pursue it further.

After obtaining a Bachelor’s of Science degree in chemistry and biology, Paul was employed by Smith-Dorsey Pharmaceuticals as a quality control chemist before attending the University of Nebraska College Of Medicine in Omaha.

Following graduation from medical school, the family moved to Denver so Paul could complete his rotating residency.

Following his residency, Paul practiced in Ogallala, Neb., before the need for medical personnel during the Vietnam War saw him recruited into the U.S. Navy as a lieutenant commander.

In January of 1968, Paul married Catherine Johnson and their family suddenly enlarged to seven children; adding Donell, David and Brad.

In November of 1969, following his discharge, Paul and family moved to Grant where he joined Dr. Les Potts in the private practice of medicine and surgery.

The most central and momentous event of Paul’s life occurred in the fall of 1977 when the Lord Jesus Christ came into his life.

During the following six years they lived in Zaire, West Africa at Kajiji, a mission station consisting of a Christian Church of 800 members, a nursing school and a 150-bed general hospital.

During the six years spent in Africa, along with many return trips to Africa, God gave Paul so many opportunities to serve Him. During this time he discovered there is no greater joy than knowing one is in God’s will and has been given the opportunity to serve the Lord Jesus Christ. A continued blessing was that of a faithful, understanding and loving wife to serve along with him.

Paul will be eternally thankful to have lived in Grant and had the opportunity to provide, in some small way, the medical care to a community made up of such wonderful people.

Paul was preceded in death by his first wife, Phyllis; and son, Steve in 2012.

In lieu of flowers, memorials are suggested to the Perkins County Health Services Foundation. Condolences can be shared online at bullocklongfuneralhome.com, where the service will be streamed live for those unable to attend.

Services were Wednesday, Dec. 20, 2017 at 11 a.m. at New Life Fellowship Church with Pastor John Goodell officiating. Burial will be in the Grant Fairview Cemetery.