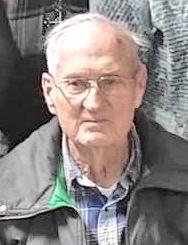 Dick was a lifelong resident of the Ashby and Hyannis area, and at age 17 went into the U.S. Navy and served during WWII. After his discharge he married Marcella “Sally” Paige. To this union three children were born, Rick, Tammy, and Robert.

Dick worked for Burlington Railroad for 10 years. He owned Dick’s Repair shop in Hyannis. He was a lifelong member of the American Legion.

Dick married Sharon Henderson in 1974 in Las Vegas. The couple continued to live in Hyannis.

Dick was an avid antique collector and antique car collector. He organized trail rides at the Windmill County Days for a number of years.

Memorials are suggested to Whitman Cemetery and Hyannis Ambulance Fund. Online condolences may be shared at www.adamsswanson.com.

Graveside services will be held 2:00 p.m. MT Friday, Jan. 8, 2021 at Whitman Cemetery with Pastor Doug Lee officiating. The service will be livestreamed on the Adams & Swanson Facebook page for those not able to attend. Adams & Swanson Funeral Home is in charge of arrangements.