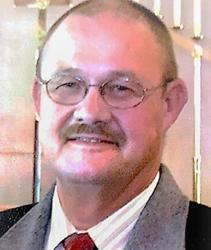 Ron was born July 24, 1951 to Robert and Rosa Belle (Curran) Repass in McCook, Nebraska. He grew up on the family farm and graduated from Hayes Center in 1969. He attended UNL for two years before returning to Hayes Center. He worked for the Hayes County Coop for two years; then joined his father in farming and livestock. Ron spent until 1993 in farming and the fertilizer business. After this he drove a truck until his retirement in 2015.

On June 2, 1973 Ron was united in marriage to Rita Fulk, to this union two sons were born, Scott and Kyle.

Ron accepted Jesus Christ as his personal Savoir in November of 1984. At the time of his death he was a member of the McCook Christian Church.

Ron received his joy from His Lord, his wife, his children, and his grandchildren.

He enjoyed following his grandchildren and numerous other kids in the community as they learned and excelled at all kinds of sports and music.

Those left to cherish his memory are his wife, Rita of 47 years. Mother Rosa Belle Repass of McCook. Sons Scott and Margaret Repass of McCook and Kyle and Jeanna Repass of Overland Park KS. Grandchildren Adam, Ariel and Christian Repass. Sister Gaylea and Chuck Bunstock of McCook. Brother, Jerry and Kate Repass of Hayes Center. Brother in Law Bruce and Ann Fulk of Wallace. Numerous nieces and nephews.

A Memorial Service will be held at 11:00 a.m. on Wednesday, June 24, 2020 at McCook Christian Church with Pastor Clark Bates officiating.

Burial will be at the Hayes Center Cemetery at a later date.

Memorials may be made in Ron’s name to the American Diabetes Association, PO Box 11454, Alexandria VA 22312.

Carpenter Breland Funeral Home of McCook has been entrusted with the arrangements. Please visit our website at www.carpenterbreland.com to leave your messages of condolence for the Repass family.