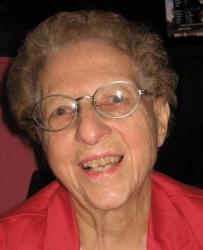 Rosemary was born July 08, 1924, in Grainton, Neb., to Joseph Welsh and Edith Sintek Welsh. Rosemary graduated from Grainton High School with the class of 1941.  She attended Beauty School in Hastings.  Then returned back to Elsie where she opened Rosemary’s Beauty Shop in the old Allen’s store.  She married Garnet Walters February 21, 1949 in Omaha.  The couple lived back of the Elsie drug store until December 1949 when they moved into their home where they raised their five children.  She continued to operate her beauty shop, out of their home, while she raised her family.  Then she worked as a postal clerk in Grant and continued working there until her retirement.

Rosie was member of the Resurrection Catholic Church, Alter Society and American Legion Auxiliary.   She was always supportive of her children in their activities.  She continued this with watching her grandchildren’s activities.  Rosie made special trips to visit her children and grandchildren in Alabama and Tennessee.  A special trip for her was when she traveled to Rome with her daughter, Beth.

She loved animals, especially her dogs, cats and “Stevie” the donkey.  Rosie had great pleasure in cooking for family and friends, and will always be remembered for her homemade noodles and cinnamon rolls.

The was preceded in death by her parents, husband and eight siblings.

The family wishes to thank the staff at Monument Rehab & Care for the excellent care they gave mom.

A memorial has been established in Rosemary’s name to; Monument Rehab and Care Center, Scottsbluff, NE.

The service will also be livestreamed via Carpenter Memorial Chapel Facebook page for those unable to attend in person. Online condolences and sharing of memories can be made at www.carpentermemorial.com