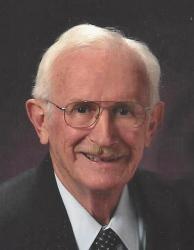 Wayne, the youngest of 13 children, was born on April 15, 1930 on a farm near Ragan, Nebraska to Leslie and Ora (Salmon) Aten.  He grew up in the Ragan area and graduated from Perkins County High School in Grant.

He was united in marriage to Barbara Beth Watkins on May 28, 1947. They moved to a ranch near Long Pine, NE for a short time before a farm accident caused them to return to Grant where they raised their four sons. Wayne started working at a clothing store in Grant in 1951, a business he would later purchase in 1966. Wayne then expanded Aten Dept. Store to 5 stores. They made their home in Goodland, Kansas after purchasing a store there in 1982.  Wayne was very active in his community, serving as Rotary District Governor as well as being active in the Methodist Church, the Jaycees, the Chamber of Commerce and the Masonic Lodge.  In 2016, Wayne & Barbara moved to Lincoln to be closer to family.

Wayne was known as the “Ice-Cream Man,” making hundreds & hundreds of gallons of homemade ice-cream for various benefits & family gatherings. He loved his community and looked for opportunities to give of his time, talents, and treasures. He collected and recycled hundreds of pounds of cans donating the proceeds to Rotary Polio-Plus. His grandchildren remember him for his great sense of humor, orneriness, and the tunes he would sing with a smile on his face. To him, the world wasn’t about the places, it was about the people. He would travel anywhere to see someONE, not something. His popular saying was, “It’s good enough for who it’s for!” A gesture spoken with a sense of contentment & gratitude for all he had.

Due to the current Covid situation, the family will hold a memorial service in both Lincoln and Grant at a later date.

Memorials are suggested to Masonic-Eastern Star Home for Children in Fremont, Neb.