From the Pulpit: This is love 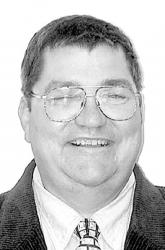 Jesus said, “This is My commandment, that you love one another as I have loved you. Greater love has no one than this, that someone lays down his life for his friends.” (John 15:12-13)

John was born on Jan. 10, 1949. He grew up in San Diego, California. I would like to tell you that he was always a good kid, but the truth is that he was in and out of juvenile detention facilities many times.

Eventually, he fulfilled the conditions of his parole and was drafted into the United States Army and served in the Vietnam War from 1968 through 1970.

On Feb. 10, 1970, John led his unit through intense fire to rescue a platoon, which was pinned down. He was successful in setting up a protected firing position from which he and his unit could fight back the enemy.

All of a sudden, the enemy succeeded in throwing a fragmentation grenade into the middle of him and his unit. Without hesitation, John covered the grenade with his helmet and covered his helmet with his body.

On top of his helmet was where John was when the grenade exploded.

It’s the kind of love, which on June 15, 1971, had the Medal of Honor bestowed on John Philip Baca. John was also awarded the Silver Star, the Bronze Star Medal and the Purple Heart.

That is the kind of love that John Philip Baca had. It’s certainly the love that Jesus has for all people.

No, that is not quite right. Jesus has a love that is far greater than that of John Philip Baca.

You see, while John was ready to die for his friends, he was also willing to shoot his enemies. Jesus was crucified for those who loved Him, but also for those who hated Him, who mocked Him, who spit on Him, who whipped Him and who beat Him.

Jesus also died to save sinners like me and you.

This is why even as we celebrate God’s blessed gift of earthly love, we also give thanks for the fact that God so loved the world that He gave His only-begotten Son so that whoever believes in Him will not perish but have everlasting life.

By the way, to my knowledge, John is still alive and is currently involved in helping the homeless and Vietnam Veterans.