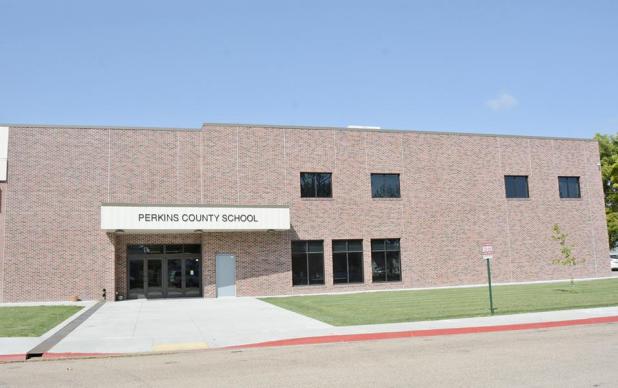 The addition as it stands today. Students are greeted by the commons area / lunch room, and straight ahead is the new gym. Double doors to the left connect the old building which leads to the commons area and Pritchett Gym.

Aug. 16 marked a milestone for Perkins County Schools as well as the Perkins County community. The school board approved the last payment on the building addition, which totalled $768,451.25.

The board voted in June 2014 to approve the $7.5 million addition to the north side of the high school. It included new classrooms, a new kitchen, lunchroom, commons area and a new gym with locker rooms.

With the completion of the addition in August 2015, seventh and eighth graders joined the high schoolers in one building on 740 Sherman Ave., and sixth graders joined kindergarten through fifth at the elementary school on 419 Logan Ave. Sixth through eighth graders had previously attended school at the Madrid facility. That building was sold to John and Kyle Harms for $41,050 in February 2016.

Current Board President Jayson Bishop said the board planned to pay off the building loan in four years and they were able to meet that goal.

Both he and Superintendent Phillip Picquet said that although the 2018-19 budget has not been finalized, indications show the tax asking will be reduced significantly with the elimination of the building payments.

Bishop said initially choosing to move forward with the addition was a tough decision for the board. However, they felt there would be educational advantages by consolidating buildings into one community.

This year, for example, eighth graders proficient in math are now able to take algebra from a high school math teacher—an opportunity they wouldn’t have had before.

Bishop said they will keep working on ways to try to make better use of the resources they have.

Picquet, who started as superintendent a month after the addition was approved, said they are looking into updating classrooms, bathrooms and the playground at the elementary, and maintaining their roof replacement schedule.