March Senior of the Month honored 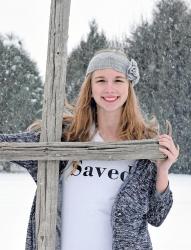 The March Senior of the Month honor has been awarded to Jessica Klingelhoefer.

During her high school career, Klingelhoefer has put her talents to use in several organizations, academics, sports and serving her community.

Klingelhoefer has served her fellow students for four years as student council secretary.

Her academic efforts have been recognized by earning her a membership in National Honor Society.

Klingelhoefer put her performance abilities on display as a chorus member and participant in school musicals, One Act plays and speech.

Volleyball has been a long-running passion for Klingelhoefer. She participated on her high school team for four years and played two years of club volleyball.

Beyond her other commitments, Klingelhoefer has been employed as a babysitter, has studied at Chiropractic Lifestyle and is currently employed at Hugs-N-Teddybears Daycare in Grant.

After graduation, she plans to attend the University of Nebraska at Kearney where she will study to receive her teaching degree within a science or health related field.

For being selected Senior of the Month, Klingelhoefer’s picture will hang in the lobby of Pinnacle Bank in Grant. She will be eligible for a scholarship awarded at the end of the school year.