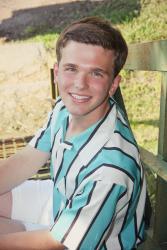 Perkins County Schools September senior-of-the-month honor has been given to Sam McArtor, son of Mike and Tanya McArtor.

Throughout his high school career Sam has been involved in numerous activities, including competitive speech team, One Act, FFA, mock trial, and National Honor Society. He was also elected President of Student Council for his senior year.

His participation in such events has resulted in several high honors. Sam is a three-year letter winner in speech team, One Act, mock trial, and musical.

Outside of school activities, Sam has been active in serving the community, including a project done for Boy Scouts where Sam, his father, and a team of volunteers rennovated the southeast corner of the Grant City Library. His volunteer activities also include Camp Machasay Church Day Camp and trash pick-up along Highway 61.

The accomplishment that McArtor is most proud of from his time in high school is earning the rank of Eagle Scout. “Reaching this goal was a culmination of eleven years of learning skills, earning badges, and volunteering for community events,” he said.

Sam has a broad work history throughout high school, including Hastings Memorial Library where he was a library intern, Reiger Equipment Company, Perkins County Historical Society and most recently, Scooter’s Coffee shop as a barista.

McArtor plans to attend the University of Nebraska at Lincoln, and would like to pursue a major in communications with a minor or double major in accounting. He ultimately aspires to be an entrepreneur and own a business.

For being selected senior of the month, Johnson’s picture will hang in the lobby of Pinnacle Bank in Grant. He will be eligible for a scholarship awarded at the end of the school year.