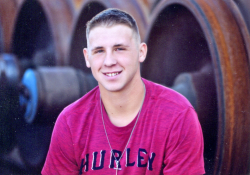 The April senior of the month honor has been awarded to Tyson Patrick.

Patrick is the son of Trent and Angie Patrick.

During his years at Perkins County High School, Patrick has dedicated time to activities, academics, athletics and his community.

Patrick lettered in drama with his participation in “Oedipus Rex” and also took part in competitive speech.

He is a member of FFA and competed in State FFA in ag sales and agronomy. He also attended Boys State.

As an active band member he has been part of pep band, jazz band, concert and marching band. He received honors as a member of sax quartet.

He is an academic letterman and a part of National Honor Society.

As an athlete, Patrick put his talents to work in football, basketball, golf and baseball for all four years of his high school career.

He received an NCPA Academic All-State award for football in 2015 and served as a captain for the team.

As a member of the basketball team, Patrick assisted his team in their 2018 state berth.

Patrick has been a part of the state qualifying golf team for three years.

In addition to his time dedicated to activities, academics and athletics, Patrick has spent time serving his community through blood drives, Mercy Meals, Lions, vacation Bible school and more.

For being selected senior of the month, Patrick’s picture will hang in the lobby of Pinnacle Bank in Grant. He will be eligible for a scholarship awarded at the end of the school year.