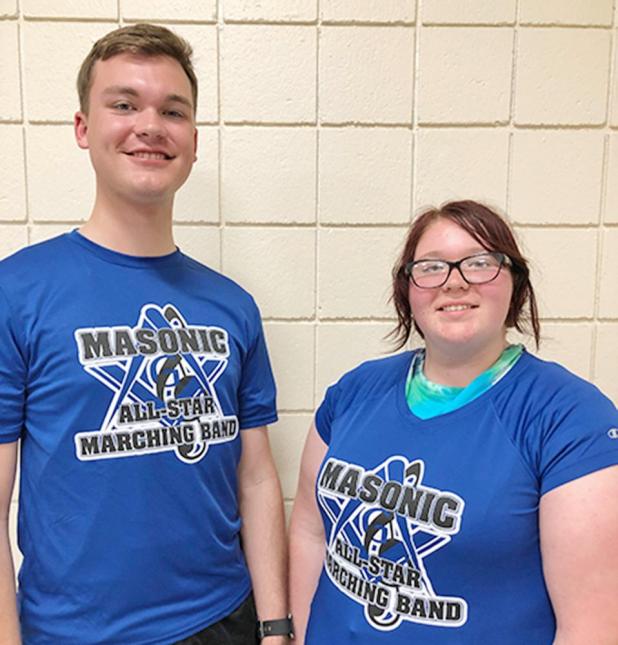 Participating were Matthew Wendell of Grant and Summer Postlewait of Venango.

The band members devoted four days of intense practice starting May 28 to learn the music, marching steps and field formations. The band gave their first public performance with a public concert at Harmon Park on Friday evening, May 31.

The band led the Shrine Bowl Parade in Kearney on Saturday morning, and also performed the pre-game National Anthem and during half-time of the 61st Annual Shrine Bowl football game at the University of Nebraska—Kearney.

“We demanded a lot of the students during the past week,” Weber said. “They responded professionally and worked very hard. That was evident by the high-quality shows they performed Friday and Saturday. There’s no doubt these young musicians are among the best in the state.”

Coupled with hard work, the members also enjoyed evening activities consisting of a night of free time and music on the football field, bowling at the Big Apple Fun Center and a dance.

“Patients at the Shriners Hospitals for Children will benefit the most from the band’s efforts this past week. We sincerely appreciate their contribution to raise awareness and funds to enable the Shriners to help even more children,” said Bob Moninger, Grand Master of Nebraska Masons.

“Masonic lodges across Nebraska support local youth and community projects, humanitarian efforts including a child identification program, academic scholarships, and efforts to support our military,” Moninger said. “At the statewide level, the Grand Lodge helps to maintain two homes: The Nebraska Masonic Home at Plattsmouth for Masons and their female relatives, and the Masonic-Eastern Star Home for Children in Fremont. The combined philanthropic efforts of Masonic-related organizations amount to more than $2 million a day.”

Freemasonry is the oldest and largest fraternal organization in the world and is based on the lessons of living a life of brotherhood and high moral standards as portrayed symbolically in the work of stone masons who built the cathedrals, abbeys and castles of Europe.