Perez selected as Senior of the Month 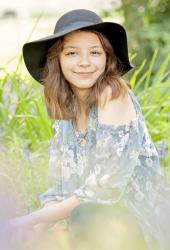 The January senior of the month honor has been awarded to Valerie Perez.

Perez is the daughter of Ignacio and Anita Perez.

Throughout her high school career, Perez has participated in several activities including school organizations, drama, music and sports. She has also excelled academically.

Perez has served her class as Treasurer her sophomore year and secretary her junior and senior years. She is also a part of student council and FFA.

As a four year FCCLA participant, Perez served as Secretary her sophomore year and president her junior and senior year.

With FCCLA she attended state her freshman, sophomore and junior years as well as nationals her junior year.

Academically, Perez has been selected for Scholastics, receiving first in Family and Consumer Sciences. She has also participated in Science Club.

Her artistic talents earned her third place in Best of Show at the Phillips County art competition.

Perez has put her acting skills to work as part of Mock Trial, One Act Plays, speech and the fall musical.

As an athlete, Perez ran track and cross country.

In addition to her school achievements, Perez has dedicated time to PCYC, the NHS bloodmobile and the Venango community Easter egg hunt, amongst others.

She is employed by Westview retirement community, serves as a waitress and cleans her church.

For being selected Senior of the Month, Perez’s picture will hang in the lobby of Pinnacle Bank in Grant. She will be eligible for a scholarship awarded at the end of the school year.