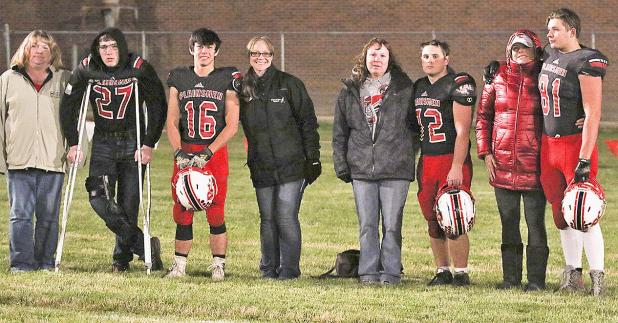 This year’s seniors pose with their moms after Friday’s game for the last time as a Plainsmen football player, They include, from left, Andrea Brueggeman, Deitrick Brueggeman, Trye Hickey, Sharla Hickey, Kandi Zimmerman, Matt McClung, Suzi Bullock and Kyler Bullock.

The Perkins County Plainsmen finished out the season with a 2-6 mark after falling to Hemingford 53-16 Friday on Haenfler Field.

Head Coach Jonathan Hunt said his team has come a long way during the past season in ways that don’t necessarily show up on the scoreboard.

Compared to last season, Hunt said they are in a “much better place than last year.”

There’s little doubt this year was another building year as he works to instill a new culture for the program.

While the Plainsmen were ineligible for the playoffs this season, that changes next year.

Being ineligible for the playoffs took some of the edge off the season, but that’s certainly not the kids’ fault, he noted.

He said his kids played hard in every game clear to the end, regardless of whether they were ahead or behind.

Hunt said he is not rebuilding from the ground up for next year.  His juniors next year will have 15 games of varsity experience, which will be a plus competing for playoffs next season.

Of the eight teams the Plainsmen faced, five qualified for the D1 playoffs.

After the Plainsmen dropped their opener to 7-1 Dundy County Stratton, Hunt said his kids continued to get better every week.

While he loses four seniors he’s expecting at least four to five eighth graders to come out next year. He’s hoping for 24-25 players next season.

Hunt said they knew Hemingford was going to be a tough opponent but he was disappointed in the team’s defensive execution.

Hemingford put five scores on the board before the Plainsmen put up one of their own.

Quarterback Triston Hite hit Keenan Palu on a wheel route down the sideline. Palu broke a tackle to get the ball to the Hemingford 15. On the next play, Hite found a wide open Jeb Kohl, who made an over-the-should grab for the touchdown.

Hite hit Hayden Foster in the end zone for the two-point conversion.

Hemingford got a quick score to open the third quarter and followed that up with a pick-six. A defensive line batted a Hite screen pass up, caught it and went 16 yards for the score.

In the fourth quarter, the Plainsmen got a defensive stop and answered with their second score.

Hite hit Foster deep, good for 43 yards to the Hemingford 7.

Two plays later, Brandon Knoles took the ball over from the one. Hite scored the PAT with a keeper around the right side to make the score 53-16.

Hite had a good night passing, throwing for 190 yards, completing 13 of 27 attempts.

He was also the leading rusher with 20 yards, followed by Knowles with 18.

Palu led the receiving corp with 4 catches for 83 yards. Foster finished with three catches for 78 yards with Kohl catching four for 28 yards and a touchdown.