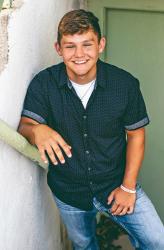 The April senior of the month honor was given to Spencer Ross, son of Tom and Michelle Ross.

Throughout his high school career, Ross has been involved in numerous activities, including FFA, football, National Honor Society, Circle of Friends, One Acts and participated all four years in basketball and track.

His involvement in these activities has earned him many honors and accomplishments. Ross was a three-sport letterman his freshman year. He lettered in basketball and track his freshman, sophomore and junior years, and was on academic honor roll all four years of high school. He was also the SPVA honorable mention in basketball his junior year.

Outside of school, Ross is involved in Youth Council, Bison basketball, Catholic youth group and has participated in several community service activities. Ross was the PC Youth Council treasurer his junior year, as well as a boys stater.

“One of the accomplishments I am most proud of was our 2018 basketball team making it to the state tournament for the first time in 10 years. Every year I have attended state basketball to watch other teams fight for their dreams. It was surreal for my team and I to be a part of that atmosphere.”  Ross said he is also proud of his academic standing, as he knows how important that is for his future successes.

He has been employed with F&P farms throughout high school, and has worked at Carquest Auto Parts his junior and senior years.

Ross said he plans to attend college in Nebraska and is looking at Bellevue University, but is still undecided on his major.

For being selected Senior of the Month, Ross’ picture will hang in the lobby of Pinnacle Bank in Grant. He will be eligible for a scholarship awarded at the end of the school year.