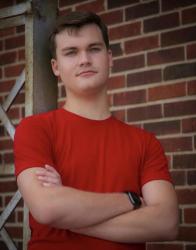 Perkins County Schools September senior-of-the-month honor has been given to Matthew Wendell.

Wendell is the son of Heather and Seth Cockerill, and Michael and Hong Wendell.

During his years at Perkins County High School, Wendell has dedicated time to activities, academics, athletics and his community.

Wendell participated in a wide variety of activities including but not limited to choir, cross country, musical, and National Honor Society. He was active in band, FFA, mock trial, one acts, speech, student council and more for all four years.

These activities have earned him honors such as FFA president, marching band drum major, and UNK honor choir. He has also been elected Senior Class Vice President, and Student Council Secretary for his senior year.

Outside of school, Wendell has been a hard worker at his jobs. He has been employed at Wendell Irrigation for four years, and has also worked for Prairie Theater and Kwik Stop. As a work study during his senior year, he spent time at Perkins County Courthouse.

The accomplishment Wendell is most proud of is his speech career. He joined the activity his freshman year, participating in Oral Interpretation of Drama (OID) and Extemporaneous Speaking. He didn’t make it to state his freshman year, but would find himself attending the state competition for the next two years. Last season at state, Wendell was able to earn a bronze medal for third place in Extemporaneous Speaking, and 12th in OID.

Speech season is yet to come around for the 2019-2020 school year, but he has plenty of practice and experience to help him return to state for a third consecutive year.

Speech also helped Wendell express his creativity and gain confidence that he hadn’t had before. This affected other areas of his school activities, such as pushing himself to pursue larger roles in one acts. This confidence also helped him join musical, where he is playing the lead this year.

Wendell plans to attend either the University of Nebraska at Lincoln or the University of California at Berkley. He will major in political science on a public policy focus track, and will possibly minor in either psychology or economics. After his bachelor’s degree, Wendell will attend law school.

His eventual career goal is to work for the FBI as a prosecutor. He would like to focus on corruption, terrorism, and organized crime.

For being selected senior of the month, Wendell’s picture will hang in the lobby of Pinnacle Bank in Grant. He will be eligible for a scholarship awarded at the end of the school year.