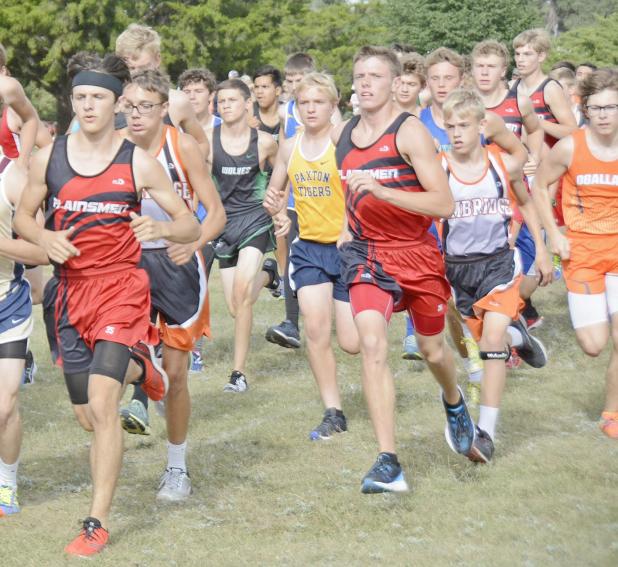 Perkins County boys including (l-r): Jaden Dietlein, Caden Waitley, Matthew Hahn and Evan Sestak, work to get ahead of the pack at the start of the cross country race in Imperial on Thursday, Sept. 6.

The Perkins County boys cross country team added their second team win at the second meet of the season at the Chase County Invite in Imperial on Thursday, Sept. 6.

The team finished 26 points ahead of second place team Ogallala. Ogallala beat out Dundy County Stratton by just one point. Coach Paula Wurst said she was excited for the boys’ first place finish.

“Dundy County has been one of our biggest opponents year after year, so it was nice to match up well with them on Thursday. They will continue to be tough competition as the year goes on,” she said.

“He looked strong and confident during the entirety of the race,” she said.

Caden Waitley took third with a time of 18:15. Wurst was concerned about him running as he hadn’t been feeling well. He told her he would back off and take it easy if he started to feel bad. Wurst said his third place medal is a testament to his toughness and hopefully he will feel better this week.

Matthew Hahn earned a 10th place medal with 18:50. Wurst said he ran a smart and tactical race, breaking 19 minutes for the first time.

Jarin Tines came in as the final varsity scorer at 19:44 for 27th place, running nearly his best time ever.

Wurst said Colton Pouk, Carter Krajewski and Kai Colgrove all ran together and improved their times markedly from the week before.

Wurst noted it was nice to have cooler weather and she thinks it helped with everyone’s improved times.

“I was really pleased with everyone’s efforts. This is a big race with lots of competitors. Medaling at Chase County is an accomplishment!”

The team will travel to McCook on Thursday, Sept. 13 for their third meet of the season beginning at 4 p.m. MT.