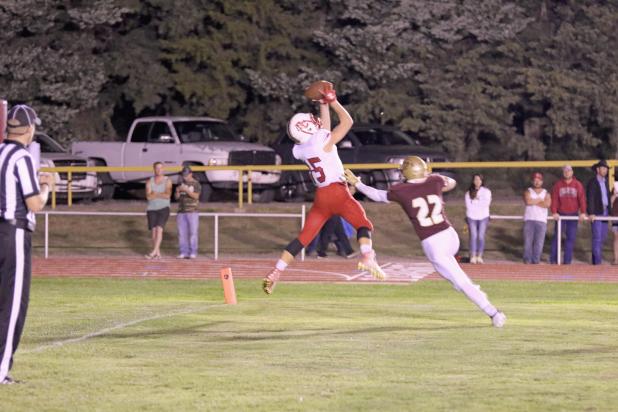 Sophomore Hayden Foster catches the ball in the end zone for a two point conversion in the fourth quarter, giving the Plainsmen a total of eight points.

The bigger, more experienced Tigers took command early in the game. They scored on their first four possessions of the game en route to a 56-8 win over the Plainsmen.

The Plainsmen battled turnovers in the game committing a total of four, including three fumbles and an interception.

On their first four possessions the Plainsmen lost two fumbles, both of which were converted by the Tigers into touchdowns. Those mistakes hurt, Hunt said.

The Tigers size and speed gave them control of the ground game as well. All 482 yards of offense came on the ground.

The Plainsmen got on the board in the fourth on a nine-play, 50 yard drive after recovering a Tiger fumble.

Trye Hickey accounted for five carries on the drive, including his longest run of the game at nine yards.

Shawn Lyon, who led the team in rushing with 41 yards, blasted through the line for a key seven-yard gain.

Quarterback Triston Hite set up the score on a keeper around the left side, good for seven yards to the Tiger 4.

Two plays later, Hickey went over from the one for the score.

Hite hit Hayden Foster in the end zone for the two point conversion.

The Plainsmen finished the night with 99 yards on the ground and 27 in the air.

Despite the loss, Hunt said the Plainsmen played much better this year against DCS than they did last year.

“We were more confident,” he said, and had a better feel for the game this year.

He also credited DCS as being one of those teams that can make an impact in D1 this year.

The Plainsmen will play host to Southwest on Haenfler Field Friday night.

Southwest was idle last week so they will be playing their first game of the season while the Plainsmen will already have that first game behind them.

Hunt said Southwest has a new head coach this year so they could do any number of things.

However, they are short on numbers this year and are young overall.

Last year, the Plainsmen took a 50-24 win over the Roughriders.