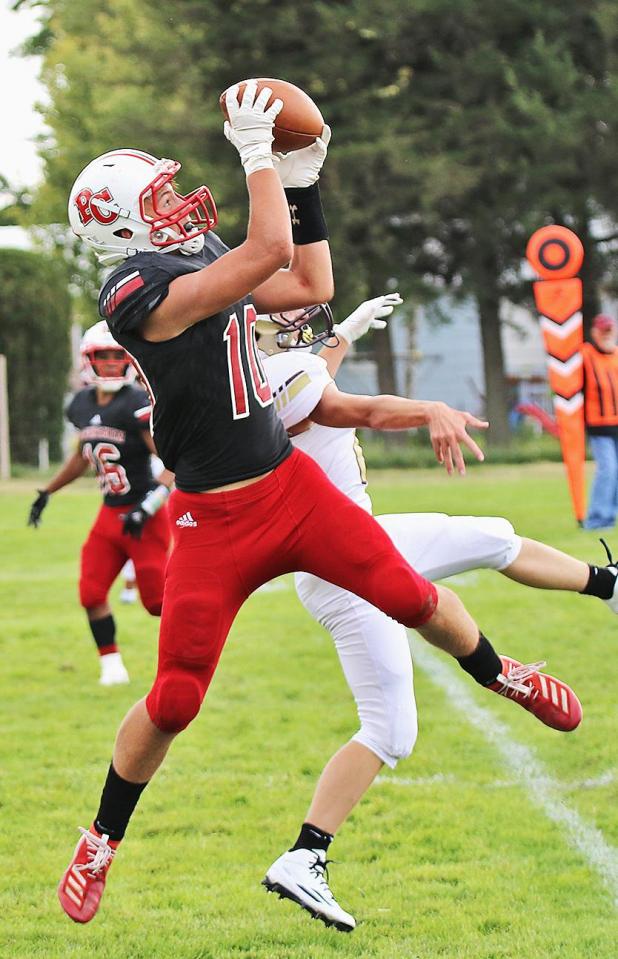 Nolan Foster goes up to pull down this 24-yard touchdown pass from Mason Toner in fourth quarter action Friday.

DCS speed too much for Plainsmen

What he didn’t expect was his team making the kind of mistakes he hasn’t seen this season so far, like seven turnovers.

Frankly, they weren’t mentally prepared for this caliber of a team, he said this week after falling to the DCS Tigers 68-22.

He said DCS showed themselves to be a “pretty good football team.”

They have speed, talent and play physical.

They overwhelmed the Plainsmen, scoring on every possession of the first half to lead 62-0 at the break.

The Plainsmen put up three scores in the second half, while giving up just one more.

Collins said they’re putting this game behind them and instead looking forward to what’s ahead.

“We’re not even going to watch game film,” he added.

The Plainsmen will travel to Bayard Friday night in search of their third win.

Despite Bayard’s 1-2 record, Collins said Bayard will challenge his team, especially through the air.

He said the spread the offense out and throw the ball.

Collins said they will move some personnel around this week on both sides of the ball.

Defensively, he said they need to concentrate on coming up to make a play and follow their assignments.

Offensively, the goal will be to keep hold of the ball after last week’s seven turnovers-four fumbles and three interceptions.