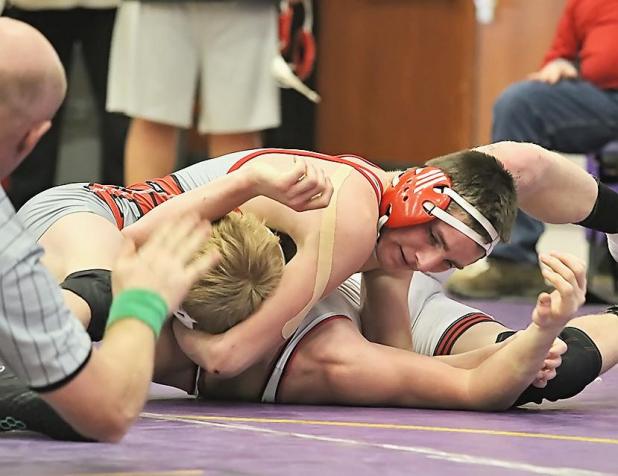 The referee is starting to slap the mat to give Colton Pouk the pin in his fifth place match at the conference tournament in Bridgeport Friday.

This marks the second year that the two conferences have joined forces to hold their tournament together. This year the meet was held in Bridgeport.

By combining the teams from both conferences, it provides enough wrestlers for eight-man brackets in each weight class.

The Plainsmen were led by Brandon Knoles. He pinned his first two opponents and then took a 19-10 decision over Nathan Coley of Mitchell for the 220 class.

Sophomore Ashton Meyer improved to 28-17 with a fourth place finish at 285.

After dropping his semifinal match, Meyer won the consolation semi to get back to the third place match,losing a 5-1 decision to finish fourth.

Colton Pouk finished fifth at 138. He won his first match with an 8-0 decision but then dropped his semifinal and consolation final to put him in the fifth place match.

There he pinned this opponent to finish fifth.

Bryder Hickey finished sixth at 145. He dropped his first match but won his way back to the consolation semifinal. He lost that match and finished sixth after falling in the fifth place match.

Coach Tanner Collins said the two-conference format works but he would like to see the classes wrestle in pools versus an eight-man bracket.

With pools, everyone would get more matches. In bracket format, a wrestler who loses twice is done.

All of the efforts of the season come down to this Friday and Saturday when the Plainsmen compete in the C4 District Meet in Hershey.

The first round and first consolation round will be held Friday, with action slated to start at 2 p.m. MT.

Collins said a number of wrestlers have a chance to punch their ticket to the state meet with a top four finish.

Collins said they have seen a good share of the wrestlers they will face in districts.

He said there’s going to be some tough weight classes where his wrestlers will need to perform.

Pouk could face a Gordon-Rushville wrestler that he’s already wrestled three times. This could be the meet to rise up and beat him, Collins noted.

Even with a 39-11 record, Knoles could still get the third seed at 220. His bracket includes the No. 2 and No. 6 rated wrestlers in Class C.

Meyer has the opportunity to qualify as well. His bracket includes the No. 1 and No. 2 ranked wrestlers in the state.  Collins says they remain beatable so Meyer will have to compete hard.

Jace Wid at 160 has missed the last several weeks after an injury suffered at Chadron.

Collins said they’ve held him out of practice but have been working on conditioning.

Results from the SPV/WTC meet are as follows: